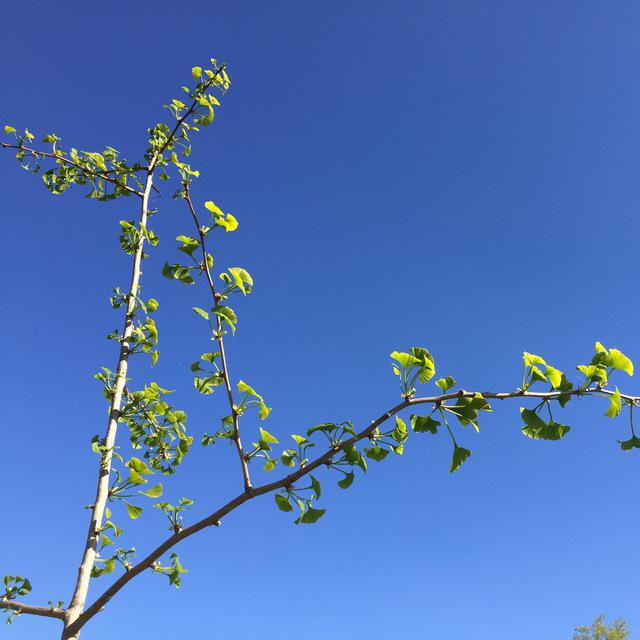 During the reconstruction the "old" website  www.xavierviennot.org  is still active,

This website contains the slides and links to the videos of the course I have given during four consecutive years at IMSc, the Institute of Mathematical Science, Chennai, India

"The Art of Bijective Combinatorics"

The combinations of the slides, the videos and this website form a kind of "video-book" which is in construction, even if all the slides and links to the 77 lectures are there.

Part I:    An introduction to enumerative, algebraic and bijective combinatorics  (January-March 2016)

Part II:   Commutations and heaps of pieces with interactions in physics, mathematics and computer science   (January-March 2017)

A mirror image in India of this website is here, kindly supported by the Institute of Maths Science (IMSc) at Chennai.

After March 16, 2019, I may not be able to update this mirror image . You may visit future versions on the original webiste  www.viennot.org 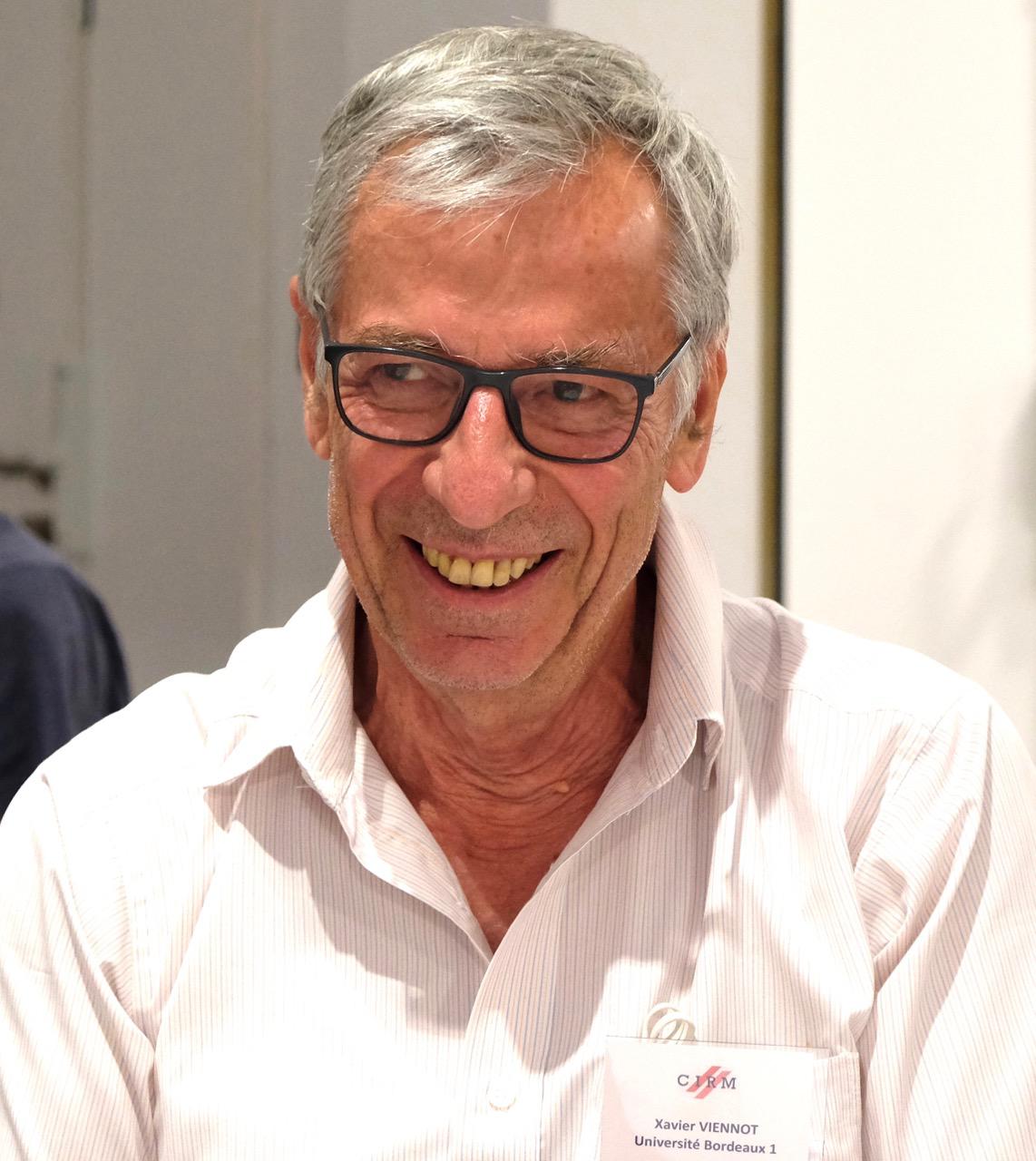 A note: Some remarks on Baxter permutations and Baxter matrices (5 pages, 27 Sept 2021)

An Interview with Toufik Mansour, Editor-in-Chief of ECA

augmented set of slides with the original slides of the video

+ some slides (in blue background) with references and comments on the questions at the end of the talk.

We propose a walk relating these topics, starting from the well-known loop erased random walk model (LERW), going around the classical bijection between lattice paths and heaps of cycles, and a second less known bijection due to T. Helmuth between lattice paths and heaps of oriented loops, in relation with the Ising model in physics, totally non-backtracking paths and zeta function in graphs.

For Dyck paths, these two bijections involve heaps of dimers and heaps of segments. A duality between these two kinds of heaps appears in some of the above papers, in relation with orthogonal polynomials and fully commutative elements. If time allows we will finish this excursion with the correspondence between heaps of segments, staircase polygons and q-Bessel functions.

An introduction to enumerative and bijective combinatorics with binary trees

slides (solution to the exercises)

Trees and branching structures are everywhere in nature. Their mathematical abstraction leads to the notion of binary trees, a basic notion in computer science. The simple question "how many binary trees with n nodes", will give us the opportunity to travel from old and classical combinatorics to nowadays enumerative combinatorics. Its «philosophy» can be summarized in the following:« replacing calculus by figures and bijections, or conversely making calculus from the visual figures ».

a video of the Tamil bijection

We present a bijection, probably new, between binary trees and pairs of vectors (w,h). The first component is the so-called canopy of the binary tree, introduced by Loday and Ronco in relation with some Hopf algebras of trees and permutations. This bijection can be defined directly, but is in fact a by-product of a more general methodology called « demultiplication of equations in a quadratic algebra ». This methodology can also produce the famous Robinson-Schensted correspondence between permutations and pairs of Young tableaux. We will introduce various concepts such as normal ordering, Wang tilings, Q-tableaux, reverse Q-tableaux, reverse quadratic algebra, planarization of the quadratic equations, demultiplication of equations, from which we will deduce the two above bijections. If time permits we will present other bijections, classical and new, obtained by this same methodology.

A series of lectures on enumerative, algebraic and bijective combinatorics giving an introduction to the video-book "The Art of Bijective Combinatorics"  (ABjC)

Many thanks to Professor (William) Yongchuan Chen for the invitation.

Lecture 1  September 9, 2019,    Proofs without words: the example of the Ramanujan continued fraction

A typical sample of enumerative and bijective combinatorics using symbolic method with the notion of heaps of pieces.

Lecture 2  September 11, 2019,  An introduction to algebraic combinatorics with RSK (the Robinson-Schensted-correspondence)

Lecture 3  September 16, 2019,  Quadratic algebra and bijective combinatorics: from RSK to the PASEP in physics and beyond

(an introduction to the "cellular ansatz" methogology)".

Lecture 4  September  18, 2019, An introduction to the combinatorial theory of orthogonal polynomials and continued fractions

more details on this Tianjin page

The video of Chapter 0, Part I of ABjC, introducing enumerative, algebraic and bijective combinatorics  is available

here on the Chinese website bilibili with subtitles in Chinese thanks to Professor Shishuo Fu.

Laguerre heaps of segments for the PASEP

The PASEP (partially asymmetric exclusion process) is a toy model in the physics of dynamical systems strongly related to the moments of some classical orthogonal polynomials (Hermite, Laguerre, Askey-Wilson). The partition function has been interpreted with various combinatorial objects such as permutations, alternative and tree-like tableaux, etc. We introduce a new one called "Laguerre heaps of segments", which seems to play a central role in the network of bijections relating all these interpretations.

A survey of the combinatorial theory of orthogonal polynomials and continued fractions.

Proofs without words: the example of the Ramanujan continued fraction

Visual proofs of identities were common at the Greek time, such as the Pythagoras theorem. In the same spirit, with the renaissance of combinatorics, visual proofs of much deeper identities become possible. Some identities can be interpreted at the combinatorial level, and the identity is a consequence of the construction a weight preserving bijection between the objects interpreting both sides of the identity.

In this lecture, I will give an example involving the famous and classical Ramanujan continued fraction. The construction is based on the concept of "heaps of pieces", which gives a spatial interpretation of the commutation monoids introduced by Cartier and Foata in 1969.

An identity of Euler expresses the classical Rieman zeta function as a product involving prime numbers. Following Ihara, Selberg, Hashimoto, Sunada, Bass and many others, this function has been extended to arbitrary graphs by defining a certain notion of « prime » for a graph, as some non-backtracking prime circuits. Some formulae has been given expressing the zeta function of a graph. We will revisit these expressions with the theory of heaps of pieces, initiated by the speaker, as a geometric interpretation of the so-called commutation monoids introduced by Cartier and Foata. Three basic lemma on heaps will be used: inversion lemma, logarithmic lemma and the lemma expressing paths on a graphs as a heap. A simpler version of the zeta function of a graph proposed recently by Giscard and Rochet can be interpreted as heaps of elementary circuits, in relation with MacMahon's Master theorem.

Slides and video related to this talk can be found in the video-book « The Art of Bijective Combinatorics », Part II, Chapter 5b.

slides   (in english, pdf 21 Mo, v2 some corrections after the talk)

The essence of bijctions: from growth diagrams to Laguerre heaps of segments for the PASEP

The PASEP (partially asymmetric exclusion process) is a toy model in the physics of dynamical systems with a very rich underlying combinatorics in relation with orthogonal polynomials culminating in the combinatorics of the moments of the Askey-Wilson polynomials. I will begin with a tour of the PASEP combinatorial garden with many objects such as alternative, tree-like and Dyck tableaux, Laguerre and subdivided Laguerre histories, all of them enumerated by n!. Using several bijections relating these objects, Josuat-Vergès gave the most simple interpretation of the partition function of the 3 parameters PASEP in terms of permutations related to the moments of the Al-Salam-Chihara polynomials.

This beautiful interpretation can be "explained" by introducing a new object called "Laguerre heaps of segments" having a central position among the several bijections of the PASEP garden. I will discuss some relations between these bijections and extract what can be called the "essence" of these bijections, some of them having the same "essence" as the Robinson-Schensted correspondence expressed with Fomin growth diagrams, dear to Christian.

Fomin growth diagrams for the Robinson-Schensted correspondence and for the jeu de taquin are some rules allowing the construction of the 4th Ferrers diagram once 3 Ferrers diagrams around an elementary cell are known.We propose here to replace these rules by some local rules on edges instead of local rules on vertices.

Growth diagrams, local rules and beyond

21st Ramanujan Symposium: National Conference on algebra and its applications,

Robinson-Schensted-Knuth correspondence (RSK), Schützenberger "jeu de taquin", Littlewood-Richarson coefficients are very classical objects in the combinatorics of Young tableaux, Schur functions and representation theory. Description has been given by Fomin in terms of "growth diagrams" and operators satisfying the commutation rules of the Weyl-Heisenberg algebra. After a survey of Fomin's approach, I will make a slight shift by introducing an equivalent description with "local rules on edges", and show how such point of view can be extended to some other quadratic algebras.

Maule: tilings, Young and Tamari lattices under the same roof

slides part II (pdf,   26 Mo)  Tamari(v) as a maule + comments and references added after the talk

Same lectures is given at IMSc, Chennai, India in two video-recorded Maths seminars 19 and 26 February 2018

(slightly augmented) set of slides and video links are available on this page.